As a follow-up to last week’s post I am presenting the other ladies who I idolized as a teen.  The three main publications that featured professional “female impersonators”  were: Lee Brewster’s “Drag Magazine”, “Female Mimics” and the cleverly titled, “Female Impersonators”.  I had been aware that there was this “profession” out there from seeing ads in the NYC area newspapers that ran small ads featuring one of the girls at Club 82 in NYC.  And then there was the traveling drag show, The Jewel Box Review that took out bigger ads with pictures of more girls, when they came to town.  But these pictures were of poor quality and usually very small.

But my world changed when I wandered down the infamous 42nd Street into the Red Light district one Saturday in 1962.  I was not long before I was a regular customer at one book store just past Broadway.  The proprietor was a big black guy named Erin.  He surmised my interest and was so nice to me, never making me feel like I was strange or bad for looking at all the female mimic mags and crossdressing fiction books in the left back corner of the small shop.  I became a loyal customer for the next 20 years.  It was the magazines mentioned above that made me realize the reality that a genetic male could truly attain a beautiful female image.  There were so many but there were three that rose to the top of my list.

Most boys would look at pictures of these amazing entertainers and say that they would love to bed them not knowing that they were looking at men.  However, I looked at them and wished I could look and dress like them.  As it turned out, none were American.  All performed at the famed Au Carrousel in Paris and two were French and one was British.  When you see them you will agree that these ladies were the Best of the Best and what crossdresser would not want to look as amazing as them?

Starting at number 3 is April Ashley (above).  I actually found out about her when I saw a Cover story in the Midnight News that had a headline “Lady was a Man”.  I was around 12 at the time.  But it was in the professional drag magazines that I realized that she started out at the Au Carrousel with the stage name Tony April.

Number 2 was Coccinelle (above).  My jaw dropped when I first saw a photo layout of her in Drag Magazine.  She eventually was featured in all three magazines, if my memory is correct.  That being said, I must admit that I wasn’t sure that she was really an impersonator.  How could someone that feminine and beautiful ever have been born male?  My young mind was blown away.

Well, if Coccinelle blew my mind, then Bambi made it explode.  My Number 1 pick of all the professionals I ever saw. OMG!  There she was in all her glory.  Everything that I wanted to be.  She had attained  the level of beauty that my GG idols, mentioned last week, had attained and she was not born female.

In my early days of dressing this lady gave me a bar to try to reach.  I knew that I could never achieve that level of perfection without the total commitment to the art which meant hormones and surgeries.  I eventually decided that loss of family and friends was too steep a price to pay but they peppered my dreams often and even to this day.

When I researched the internet for this post I was reminded of their beauty and  that everyone of them did transition completely during their years as entertainers.  I do not know about you, but it would have been a shame if they hadn’t.  For me, the world was just a bit more beautiful because they were in it.  And they gave me a dream.

The last picture is how far below the bar I fell but a decent showing since the bar was so amazingly high.

You enriched my life more than you can ever imagine.

Thank you Stephanie, you have paid it forward and done the same for us! I love and miss you!!

2 thoughts on “My Other Amazing Idols” 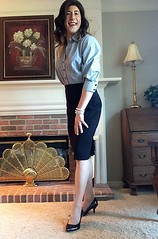 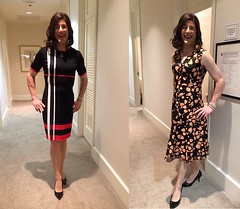 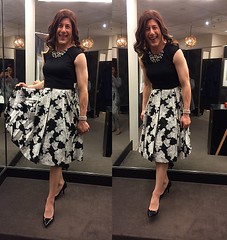 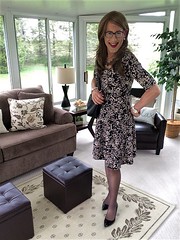