Dee is on a much needed break right now, so let’s revisit some past fun!

I woke up early Wednesday and realized my wife was meeting with a sales person just after lunch to have blinds installed in our apartment, I had a chance to get out.

If I organized myself quickly, I could stuff my girl stuff into my backpack while my wife was still sleeping. We have a small two bedroom apartment, and I keep my girl stuff in a container (clothes) and a black plastic trash bag (shoes and purse) in our second bedroom. Trying to be quick and quiet, I got everything ready before she woke.

As things turned out, my sister-in-law came to our place mid-morning so that aided my escape, as my wife was a bit distracted. I retrieved my bicycle from our second bedroom, hoisted the backpack, and announced I was going for a ride.

Technically, I did go for a ride. I rode a half-mile to the train station, and took the train downtown to my destination at Dangerfield. Yes, the lengths I go to scratch my dressing itch.

At Dangerfield, one of the Sales Angels, Delyse, who I wrote about a couple of weeks ago (“My Favourite Customer”), was working. She enjoyed the blog post very much, and enjoyed being called an Angel. I entered a change room and did my makeup and put on my new Princess Highway cat dress, which Delyse had seen, but hadn’t been working when I bought it. Like the other Angels, she approved of the dress and cardigan combination.

I met a new Angel named Emma, who was also a lot of fun (I think it’s in their DNA). Emma offered me lippy (lipstick) color suggestions and a website for clip-on earrings.

I tried on some new arrivals, and one from the discount rack that I had tried on twice previously, a strappy orange summer dress. For some reason, I thought the orange color looked good on me (the consensus generally is blue is my best color). I modeled the dress for Delyse and she asked if that was the second time I had tried it on. I held up three fingers. She thought it was a good color so I decided it was time to buy it.

When I started buying girls clothes I usually stuck to blacks and dark colors, as to not stand out. Also, I could never imagine buying a dress with just shoulder straps, as I have boy shoulders. But I finally got over the hump and started to buy (and wear) bright colors, and also decided I could live with bare shoulders (and now sometimes I run with no shirt on to eliminate my farmer’s tan to accommodate the bare shoulders look).

Besides buying the dress, I had one other piece of business to do. When I had been in the previous week before the New Pornographers concert (see Rock Girl, Redux), I asked Angel Amelia whether I should wear my fishnet socklets with my green dress and black heels. She said yes, and so I did.

Amelia then asked where I got them. I answered Nordstrom in the US, and Amelia made a frowny face. In the following week, I interpreted “where did you get them” to mean “I want a pair”. I thought about buying her a pair and sending them to her when I returned to the US, OR I could wash the ones I had and give them to Amelia, as a thank you.

As Amelia wasn’t working (not feeling well), I asked Emma for some wrapping paper to wrap them, and included a note, telling Amelia that I wanted her to have them and hope she would accept them as a gift.
It was time for pictures, and I wanted another with Delyse, as this would likely be my last visit with her before my return to the US in mid-March. Then it was Emma’s turn, so she grabbed the sunglasses, so we could have our Audrey Hepburn moment.

I then walked over to Myer, a department store, where they have a Dangerfield/Princess Highway section in the basement. While I was browsing, a Myer sales agent asked if she could help me, and added that she really liked the dress. I tried on a few things, but I didn’t have a long time because I needed to get home at some point.

In the basement of Myer, along with the trendy clothes, they have a Harry Potter attraction for kids (I’m not sure exactly what they do). However, I thought Dee and the Wizards would make for a good photo opportunity.

Return to Dangerfield, return to boy mode, and train home, with a new orange dress to add to my collection. 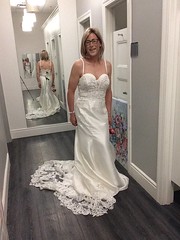